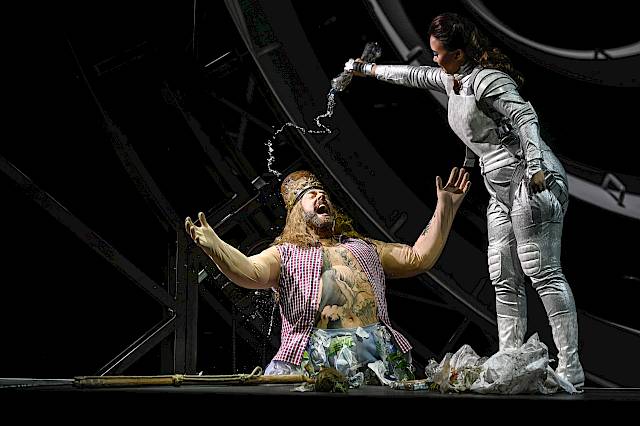 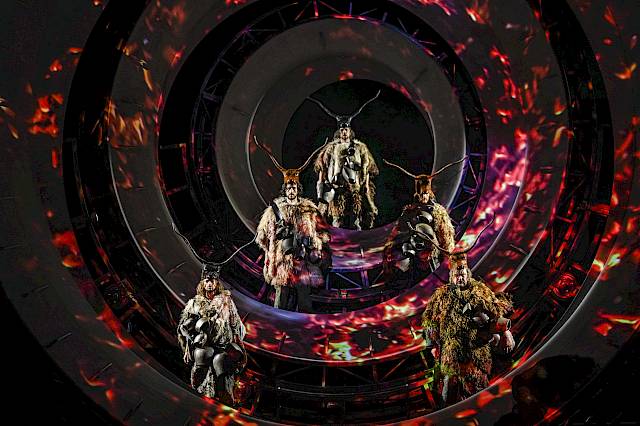 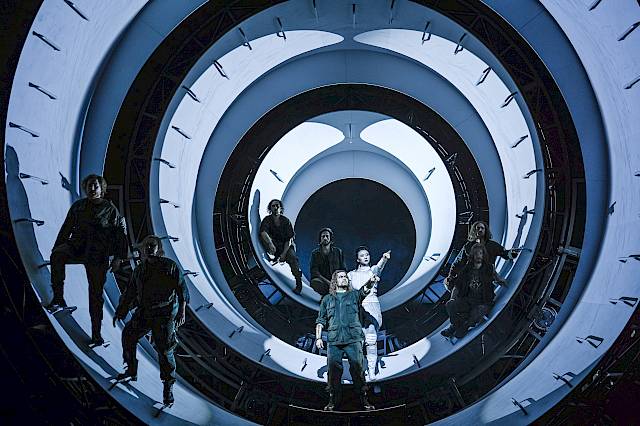 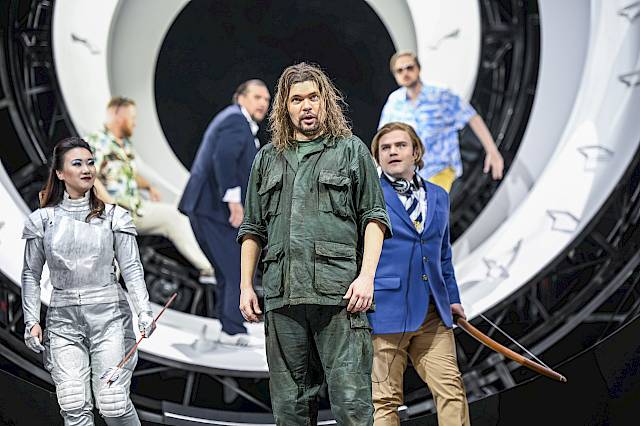 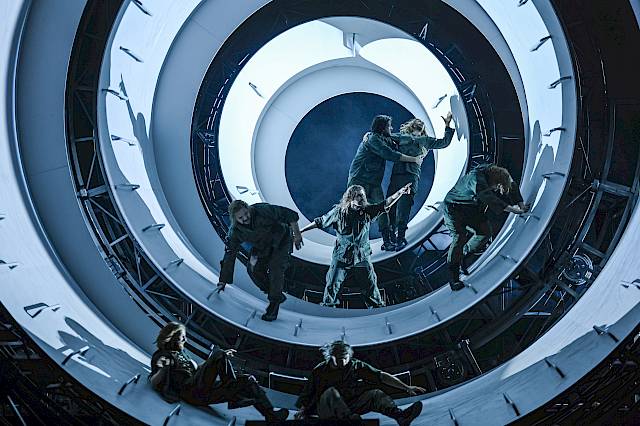 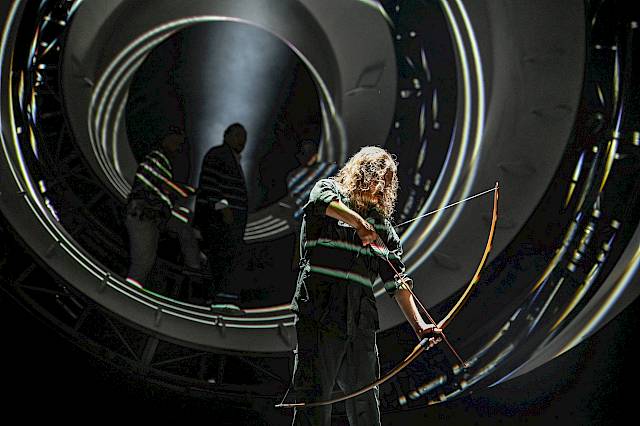 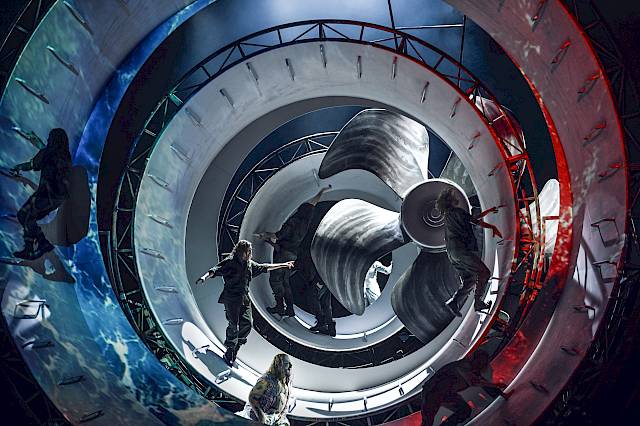 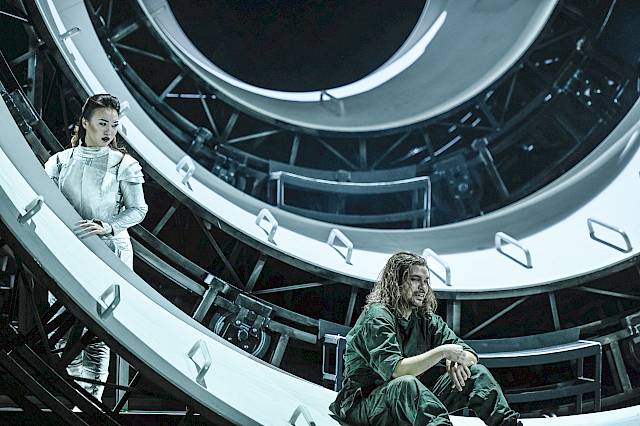 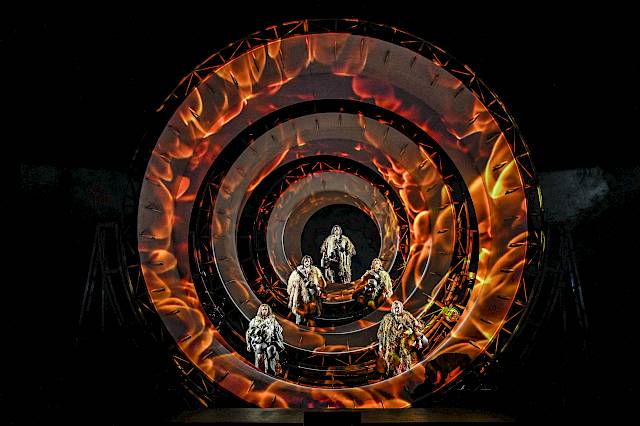 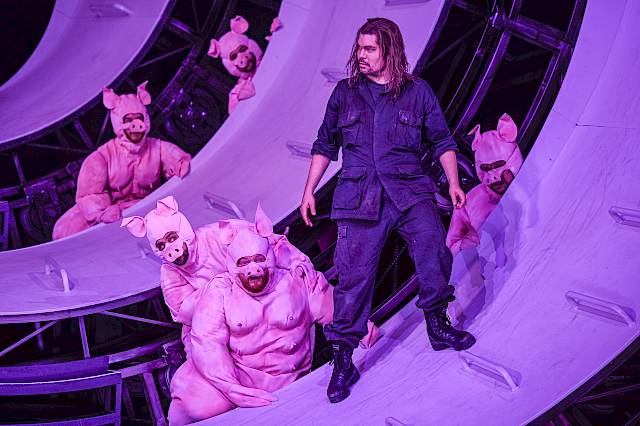 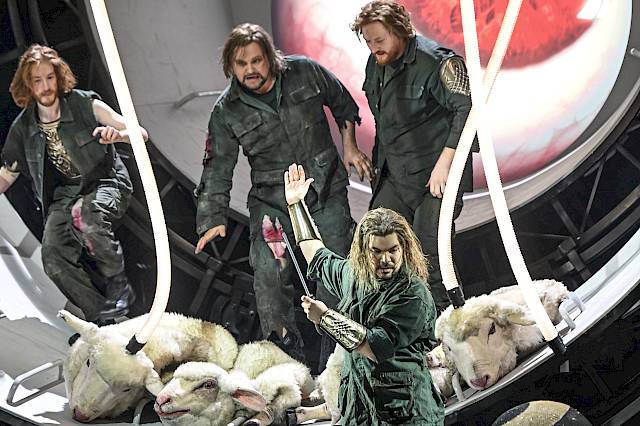 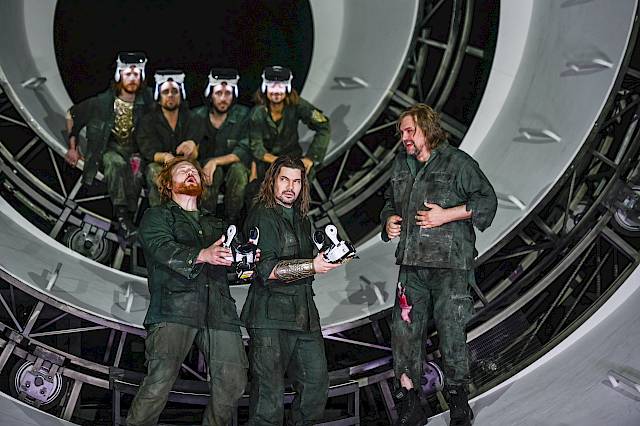 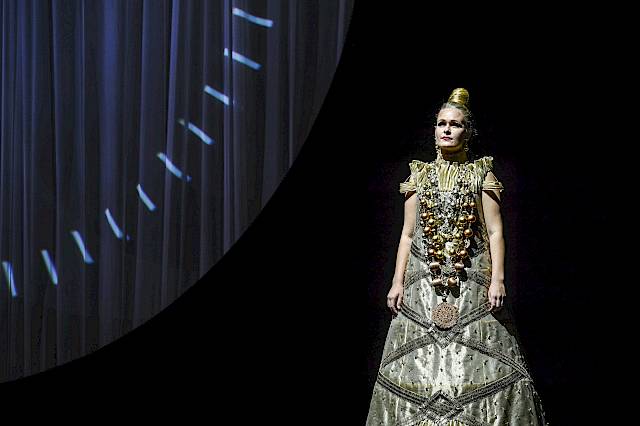 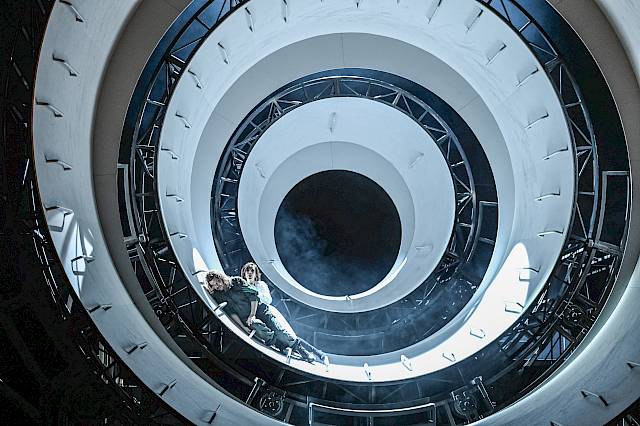 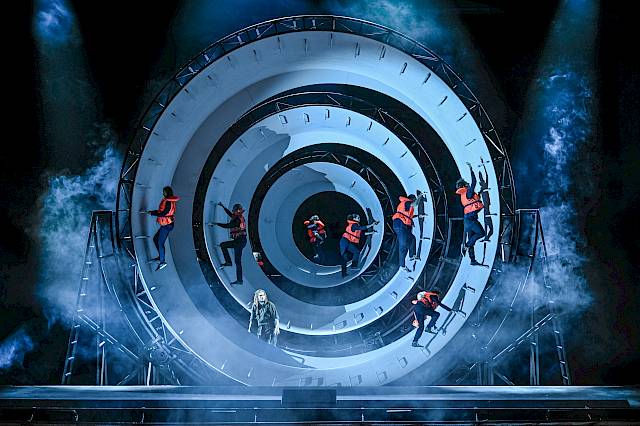 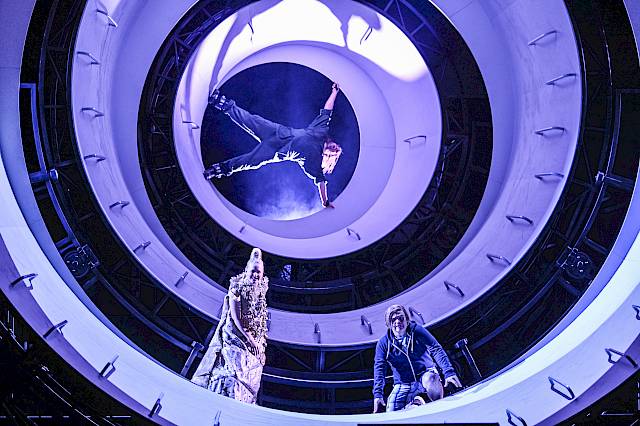 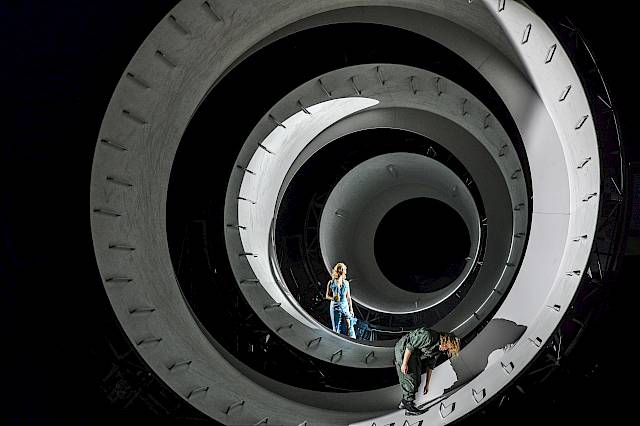 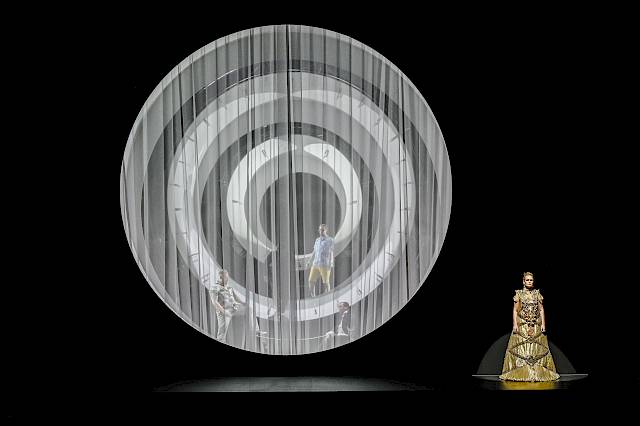 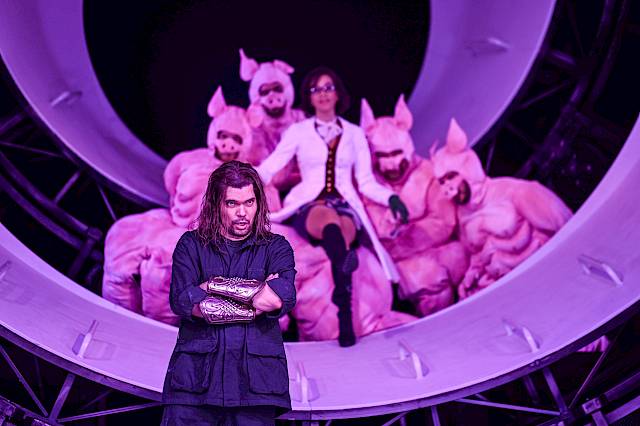 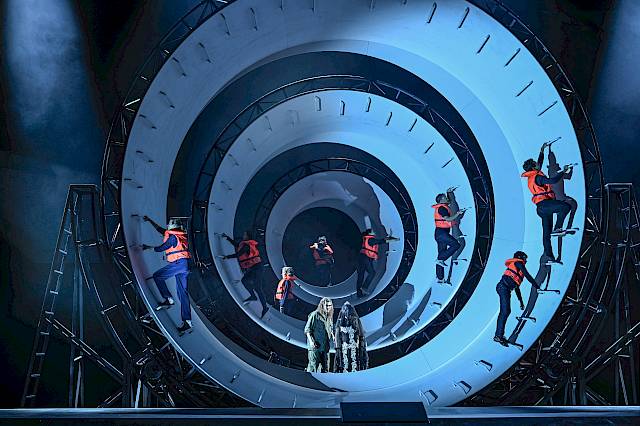 Act 1
For many years, Penelope has been waiting in Ithaca for her husband Odysseus, who has gone to the Trojan War, to return home. She is beleaguered by foreign men paying court to her and indulging in revelry in the royal palace. Her son Telemachus, who has now grown into a young man, has had enough of the disturbance and wants to have his mother’s suitors expelled. His mother and Eurycleia, his nurse, try to reassure him, as they are firmly convinced that Odysseus will return.
The goddess Athene asks Poseidon to ensure that Odysseus returns home soon. However, the ruler of the seas does not allow the hero and his comrades to arrive so promptly.
Odysseus and his companions are stranded in the land of the peaceful lotus eaters. In their happy and relaxed state, the men forget that they actually intend to go home. Odysseus has to drive them back on board by force.
The comrades hope to find a hospitable reception on the island of the Cyclops. However, they end up in the cave of the one-eyed shepherd Polyphemus, who turns out to be a ravenous monster. The cunning Odysseus manages to get Polyphemus drunk. Together, the comrades cut out the giant’s single eye. They then conceal themselves beneath the fleeces of Polyphemus’s sheep, thus escaping the cave unnoticed. In retribution, Polyphemus’s father Poseidon unleashes a severe storm.
Back on land, Odysseus finds that his companions have been transformed into swine. Circe, the ruler of the island, also wants to cast a spell over Odysseus, but Athene protects him. Circe allows herself to be persuaded and returns Odysseus’s companions to their original form. She advises Odysseus to descend into the Underworld.
In the realm of the dead, Odysseus sees his mother once more. She tells him that Penelope and Telemachus are still alive. Both Achilles, the hero who fell in Troy, and the dead warn Odysseus to leave the cattle of Helios in peace. Full of hope, Odysseus returns to his companions.

Act 2
The comrades sail past the sirens, who appear to Odysseus as Penelope and Telemachus. To ensure that he is not drawn down into the depths by their alluring song, Odysseus has himself put in chains.
Between the sea monsters Scylla and Charybdis, Poseidon and Athene fight a fierce battle of the gods. Elpenor, the youngest of Odysseus’s companions, loses his life in the process.
Having arrived in Thrinacia, the exhausted Odysseus falls asleep. In the meantime, his hungry comrades slaughter the cattle of the sun god, Helios. As a punishment, the gods unleash a scorching firestorm, of which Odysseus is the only survivor.
Odysseus recovers with the beautiful Calypso, where he stays for seven years. However, he grows increasingly homesick and sets sail for Ithaca.
Penelope has decided that she will accept the man who is able to stretch Odysseus’s bow, but not one of them succeeds in doing so. Odysseus appears as a beggar among the men. Just as he is helping his son Telemachus to stretch the bow, Penelope recognises him. After twenty years, the family is finally reunited. 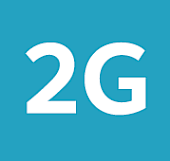 Due to the current situation, all events of the Opernhaus can only be attended vaccinated or recovered. Further information can be found here:
Protective measures